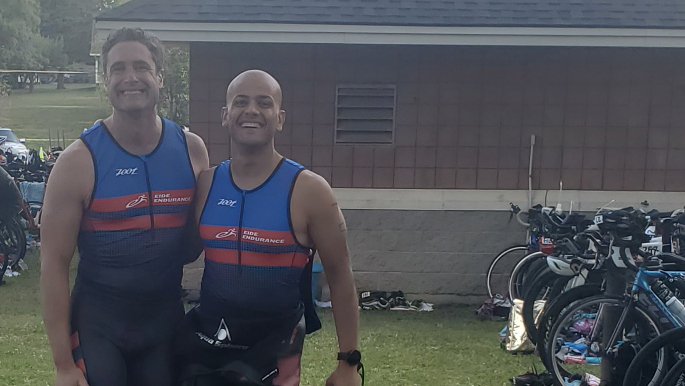 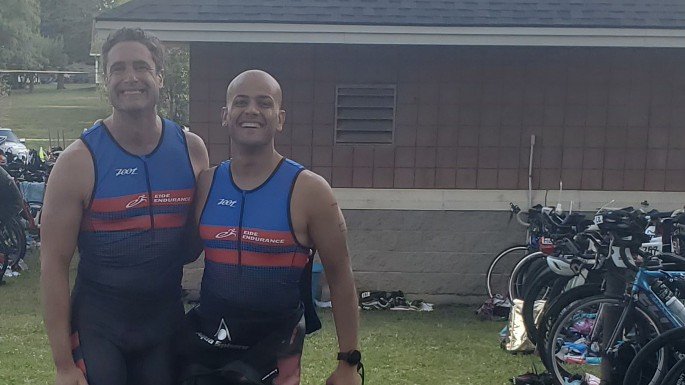 When we think of summer in Minnesota we usually think of days on the lake and the great outdoors. Summer is also a time when athletes across the nation compete in the Chisago Lakes Triathlon. A triathlon is a multi-sport event where athletes swim, bike and run in order to compete for the best time. Many athletes are competing with each other and themselves. Others are just out there for fun and some are using the race to train for a different or longer triathlon.

Moneer competed in the sprint distance triathlon which consists of a 500 meter swim, 22 mile bike and 3 mile run. Having competed in the Twin Cities Marathon in 2019, Moneer is an experienced endurance athlete. The Chisago Lake Triathlon was Moneer’s very first triathlon. While this was a short distance triathlon it’s no easy feat. Here’s what Moneer had to say about the triathlon: “I definitely enjoyed the race and it was a lot of fun. You’re out there, you’re hurting but you’re still pushing through. It’s a real mental game and it’s a great way to test yourself.”

Justin competed in the half-ironman distance triathlon which consists of a 1.2 mile swim, 56 mile bike and 13.1 mile run. Having competed in triathlons in the past Justin was using this race as a training day for Ironman Madison in September 2021 which is double the distance of the Chisago Lake Triathlon. Moneer is also slated to compete in Ironman Madison.

Here’s what Justin had to say about the triathlon: “Doing these types of endurance races is a great way to test your will and determination. Even if you have a slow time like I did, it teaches you lessons to become a better athlete for the next round.”

For this being Moneer’s first triathlon here’s what Justin had to say: “I’m especially proud of Moneer. This was his very first triathlon and he has the no quit spirit needed to do these types of races. It’s been fun to see his fitness and skill level grow over the past few months.”

Great job Moneer and Justin, what a terrific way to represent the Eide name.