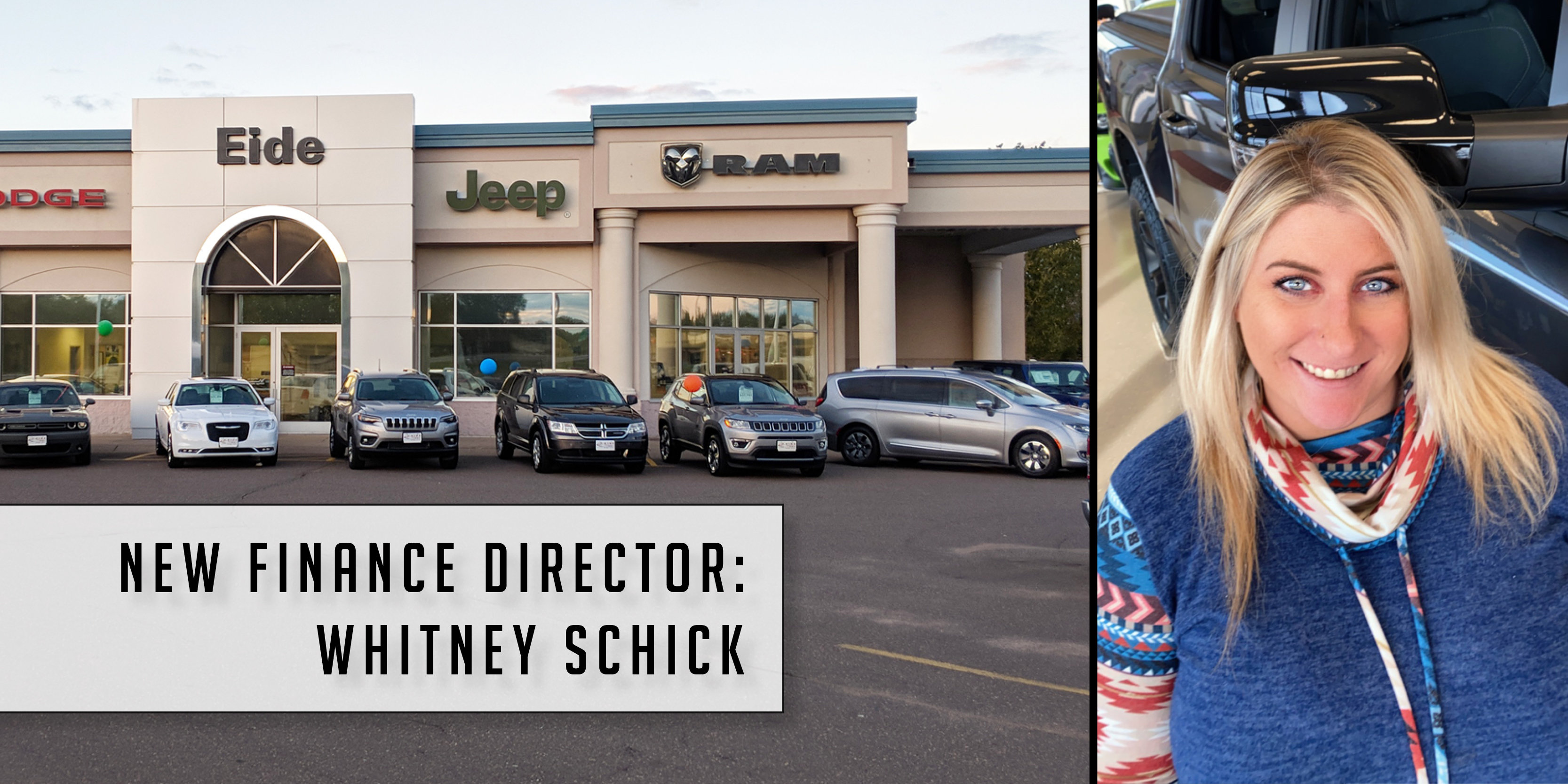 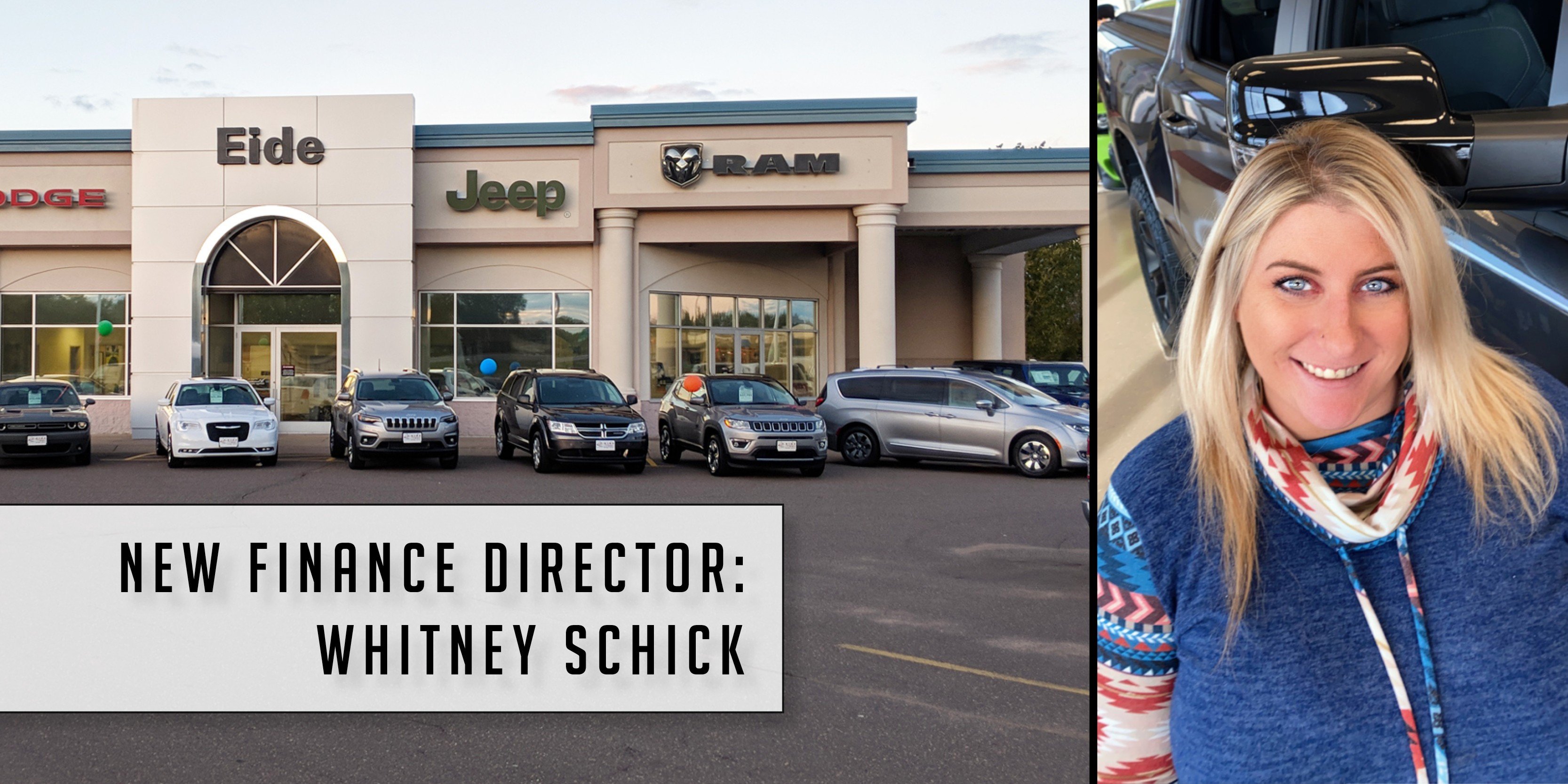 Providing an excellent experience for every customer is the Eide way and Whitney has stepped up into this new role to help customers in Pine City get into cars that they might not have been expecting to be able to afford.

Thanks to the exceptional work of people like Whitney, our service and sales teams have what they need to keep you on the road.

We're honored to have a standout employee like Whitney on our team.

Time for An Upgrade

Whitney has been with the Eide team for five years. She spent time at both our Ford and Chrysler stores in Bismarck, ND before coming to Pine City. This promotion is much deserved.

“The transition is still very early since it's only been a couple weeks, but Whitney is a great fit,” said General Sales Manager, Ryne Balzer. “It was a bit of a plan for us to come together to this store. We’ve worked together for a few years and she’s put in the work.”

“We knew she was a right fit for the role and could handle the extra workload,” said Balzer. “It was definitely her time for a promotion.”

We’re grateful for Whitney’s dedication to the Eide team and her decision to make the move to Pine City.

Bringing the Eide Philosophy From Bismarck

Whitney and her husband have relocated to the Pine City area and are very excited about getting to be part of this community. Whitney’s hometown is just over an hour away, which has made the transition even easier for her.

“It's a big deal being closer to family,” said Whitney. “Having the opportunity to move closer to where I grew up and continue to be part of the Eide team made this an easy transition.”

Her transition to Finance Director is also a natural step for her from her previous role in Bismarck. As a leader of a department, she’s now in charge of the entire finance team.

“There’s a lot of opportunity to grow within the team here, because we’re very close-knit,” said Schick. “We've brought our philosophy from Bismarck and the team here is training and making sure we hit the goals associated with that.”

“Anytime I think of Eide, I think of family,” said Schick. “Our customers become family as well. When we're bringing in customers from over an hour away, we're really doing something right. People who shop in Pine City are really choosing to do business with Eide rather than shopping for merely convenience.”

At the end of the day, Eide does what we can to take care of our customers and our team members.

“One of the biggest reasons I'm part of this company is what we do to support our community and not just sell cars. I'm a veteran and what we do is a huge part of this,” said Schick.

We thank you for your service, Whitney!

Going To Bat for Our Customers

So why choose Eide Chrysler for financing? According to Whitney, it’s simple. We're good at getting our customers the best deal and many of our customers are return shoppers or referrals.

“Our finance department at Eide has some of the most tenacious finance managers out there. We're going to fight to get our customers the best deal. This is why we get the most approvals and people come from all over to find their vehicle at Eide Chrysler,” said Whitney.

Find your new Chrysler, Dodge, Jeep, or RAM in Pine City, and get the financing you need with Whitney and the finance team.