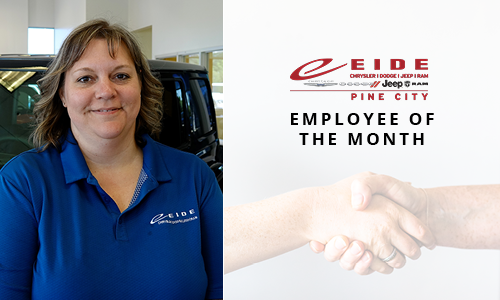 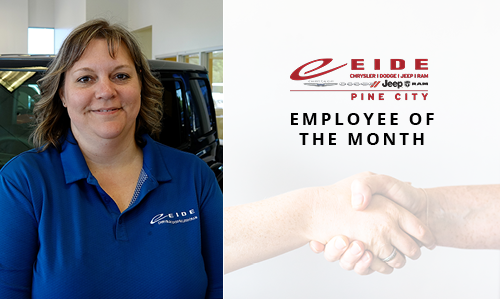 The Eide Chrysler parts department in Pine City goes above and beyond to provide great service to our customers.

One member who goes the extra mile is Gayle Kozak. Get to know Gayle and why she was chosen as Employee of the Month.

A Place You Can Believe In

It’s been a unique path for Gayle to Employee of the Month.

She’s worked with the Eide team for approximately five years total, but had some time away. When they reached out to have her back, she was happy to return.

“I didn't leave previously because of Eide,” Gayle said. “I came back because I believe in them. They're a great group to work for and you really get to know each other more than just being co-workers. There’s a family-feel here.”

“From a personal standpoint, when I came in and was new to the building, she made me feel really welcome,” Balzer said. “She’s very friendly and made my transition easier. She is Eide. She's the culture here.”

Most recently, Gayle has been with the Eide team in Pine City for two and a half years as the Parts Manager. Previously, Gayle was part of the service and administrative teams. So, she’s learned a thing or two about vehicles.

That’s the key, according to Gayle.

On a day-to-day basis, things can get pretty hectic. Luckily, it’s been business as usual (as much as it can be) in the parts department, if not even busier than normal. But Gayle is always here to help.

“Gayle is always in the building,” Balzer said. “From when I get here to when I leave she's here. She’s been hiring and training people in her department and has had to put in a lot of hard work. She's more than earned Employee of the Month.”

Kozak typically works with technicians and wholesalers, but says she likes working with the sales team to help customers accessorize their new vehicles. And she’s got a tip for customers.

“If you take care of your vehicle, it's going to last you,” said Kozak. “Part of that is keeping the manufacturer parts on it and keeping regular service appointments.”

Needs for parts can run the gamut, so when you’re in need, the Eide parts team is here to help.

LEARN MORE ABOUT THE EIDE TEAM »